A collection of sliding picture puzzles. You can chose from 3x3 or 4x4 grid sizes and select from several pictures, you unlock more as you go. You are scored based on how many moves it takes to complete a puzzle starting with 999 for the 4x4 and 499 for the 3x3 puzzles and counting down.

1993 apparently created for New Year holidays, what the title says and surroundings. We are given 50 attempts, then we can run the key as many times as points scored, and so on, until all attempts are not using. And if the key is caught under an alien, that one point is given if the top - then two. The rate of movement increases with time, and the game becomes more complicated. At the end, we offer the results appear in the table of records.

Loopy is a pipe laying style puzzle game but instead of pipes you're laying down paths that a bomb follows. The objects of the game are to first gather all the fruit on the playing field and secondly to make your CPU opponent explode against a wall or barrier. Two types of tiles are laid down. The first is a cross allowing for horizontal or vertical movement while the second is a curved tile allowing for turns. The player selects a tile depending on the direction they press and the CPU lays down your path-tile in the same way. Once the CPU is blown up against a barrier or wall the player can... 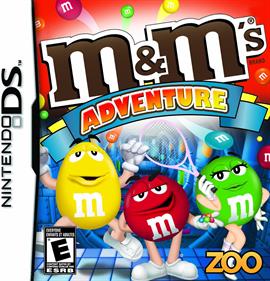 Your favorite colorful candy characters are back in their first free-roaming adventure! It's the end of the day at the M&M's Candy Factory, but one packet of candy is missing from the delivery truck! It's your mission to explore each sector of the factory and discover all of the scattered hidden candies in order to make the delivery on time. Run on conveyor belts, jump around packing crates, and sneak your way around the factory-but be prepared for the Bosses that are waiting to thwart the mission and keep the candies from leaving! Features • Playas one of your three favorite M&M's...