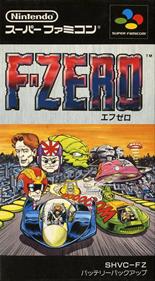 BS F-Zero Grand Prix (BS F-ZERO グランプリ) was a four-part Soundlink game to the original F-Zero. It was launched only in Japan for the Satellaview attachment for the Super Famicom. BS F-Zero Grand Prix contained four different playable vehicles and four new tracks near the end of each broadcast, as well as the 15 tracks from the original game.[2] Commentary was provided by Bucky Koba, Tsutomu Tareki, and Seiichi Hirai. A follow-up to the game was later distributed as BS F-Zero Grand Prix 2. According to Nintendo Power the game was considered to be released via Game Pak.

Super Mahjong Taikai (スーパー麻雀大会 / Super Mahjong Tournament) is a Japanese mahjong video game that was released in Japan by Koei. The players in the game each start out with $100 and the goal of attaining $10,000. The game modes are Suzumesho mode and mahjong tournament mode. If a player becomes bankrupt or attains $10,000.00, the game starts over with each player having $100 each.