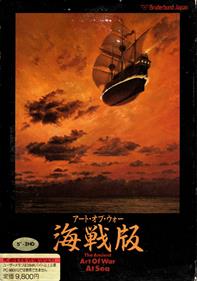 The Ancient Art of War at Sea is the sequel to the Ancient Art of War, where the battle campaigns now takes place in the vast oceans of naval combat. The game is a top-down semi real-time strategy game. The game has different speed/time settings (slower to faster), hence the player may manage strategies while remaining in real-time mode. As its predecessor, the game comes with different difficulty settings, symbolized by several famous naval commanders and also comes with a game editor. Ship Types As its predecessor, the game introduces three different types of units in the game:...

The Playroom is an educational game which is set in the locale of a child's bedroom. Almost everything on the screen can be clicked on, and the child will be rewarded by games, activities, or at least an amusing animation. In this first of what eventually became a trilogy of games including The Treehouse and The Backyard, children are encouraged to use the mouse by the wide range of interactivity with items on the screen. Games and activities encourage creativity, the learning of numbers, and letters, and the development of critical thinking.