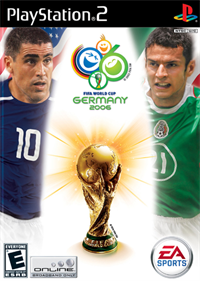 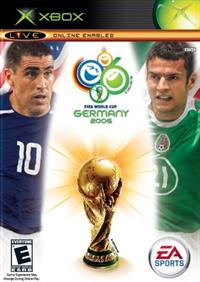 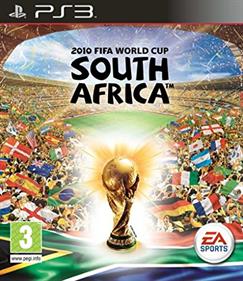 Players choose a team from the 199 nations available and compete against the computer or against other players through online gaming services PlayStation Network or Xbox Live. All 10 official World Cup stadiums are available for play. 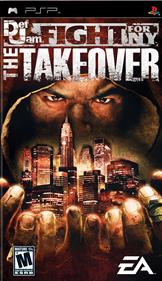 Def Jam Fight for NY takes the battle for hip-hop domination into the fighting ring. More than 35 hip-hop artists and personalities--including Busta Rhymes, Carmen Electra, Lil' Kim, Ludacris, Method Man, Redman, Sean Paul, Slick Rick, and Snoop Dogg--face off in brutal wrestling matches. In the ring and on the streets, you'll join the battle as a New York City street fighter. The game challenges you to develop your own fighting style and seize control of the hip-hop underworld. 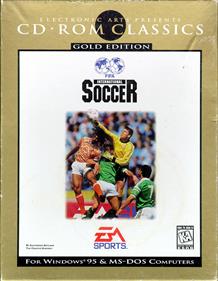 The game that started the best-selling series licensed by football's world governing body, this first installment in the long running series used a dimetric (colloquially known as "isometric") viewpoint, previously unusual in football games but quickly imitated by several titles. The televisual presentation, one of the unique points of the early EA Sports titles, with hosts introducing the matches, was another thing making the game stand out from a market dominated by Sensible Soccer and Kick Off games. Based on international teams (with fictional player names), their abilities in each... 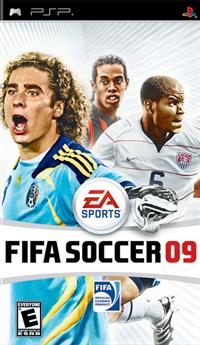 FIFA Soccer 2009 is a football (soccer) game in the long-running FIFA football game series. This PSP edition has a number of differences compared to the high-end console and PC versions. As with previous FIFA games, you can take control of a team and guide it through its paces on a game by game, season by season basis. As well as the usual updated graphics and rosters, the portable version for the first time features the "Be a Pro" mode that the console versions have had for the 2 previous iterations. Be a Pro mode allows you to take control of a single player over the course of a season,... 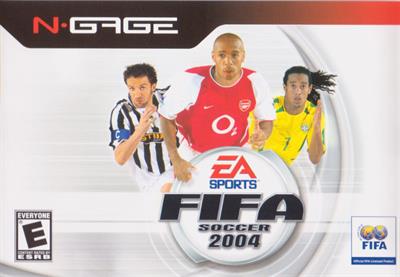 FIFA Soccer 2004 features eighteen leagues, with thirty-five national teams and over ten thousand players. Take them into a multi-season career, or individual tournaments or matches. Like EA's other 2004 games it has an in depth career mode, where you must manage your budget and team. Promote players, demote players and renegotiate contracts, all in an effort to get your team to the finals again and again. The skills to master range from kicked passes and headers to lob passes and bicycle kicks. You can take control of players before the ball reaches them, which makes it easier to find... 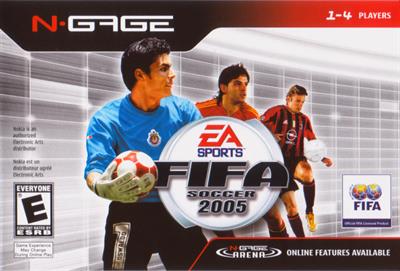 As it became the norm with the series, the game features 18 leagues and 38 national teams (some of these, due to licensing problems feature only generic kits and logos), summing up around 11 000 footballers. The main gameplay change was the addition of "First Touch" controls. By performing one of the "trick" moves before the player gets possession of the ball it's possible to do a number of moves, such as touching the ball forward to gain a few yards ahead of the defenders or touch the ball to one side, and roll to the other of a rushing defender, and then pickup up the ball a bit ahead... 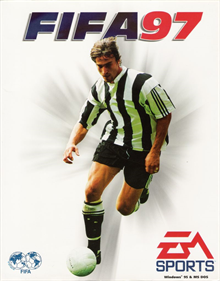 This iteration of the FIFA lineage includes commentary from John Motson with summaries from Andy Gray, with the between-match sections covered by Des Lynam. All player moves are from David Ginola using the MotionBlending technology. Full interactive replays are included. You can play a league or cup tournament, and practice your skills before playing. The game can be tailored to action or simulation style, with fouls, injuries and offsides available to toggle on or off. This version also includes a 6 vs 6 indoor play mode, and various multiplayer options 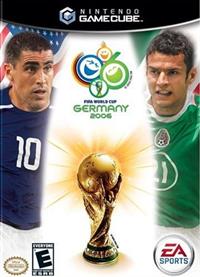 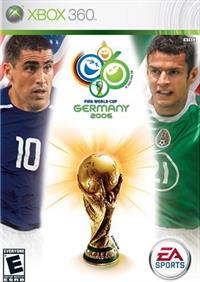 The late-1997 edition of FIFA was heavily tied in with the qualifying procedure for the 1998 World Cup. In the Road to the World Cup mode, you take a team from first qualification through to the main tournament, using the varying systems in different parts of the world. The game features 16 distinct outdoor stadia. The League play features 189 clubs and 11 leagues. Each team has specific crowd chants incorporated into the ambient sound. The action is faster than in previous versions, and AI has been expanded. Players have distinct facial feature and hair styles. Each match is introduced by... 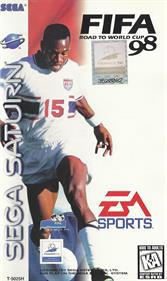 The late-1997 edition of FIFA was heavily tied in with the qualifying procedure for the 1998 World Cup. In the Road to the World Cup mode, you take a team from first qualification through to the main tournament, using the varying systems in different parts of the world. The game features 16 distinct outdoor stadia. The League play features 189 clubs and 11 leagues. Each team has specific crowd chants incorporated into the ambient sound. The action is faster than in previous versions, and AI has been expanded. Players have distinct facial feature and hair styles. Each match is introduced by...

The second installment in the series is a remake of Grand Slam Bridge with modern abilities of its time such as VGA graphics, music and animations. It represents a card game Bridge with rules of Contract Bridge. For both partners a set of bidding conventions, which include Cue Bid, Weak Two-Bid, 5 Card Major, 4 Card Major, Jacoby Transfer, Gambling NT, and Unusual NT, may be adjusted. The game progress may be saved/restored. Overall statistics for each player in the system are stored and may be displayed. The multiple options allow to adjust the gameplay such as rotate the table or change... 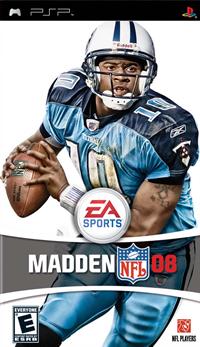 Madden NFL 08 is the third iteration of the series on the PSP. Based closely on the previous year's version, it includes most of its modes while adding a new one, and also incorporates some of the new features seen in the console versions. Returning modes include "play now", franchise (with a redesigned interface), practice, and mini-camp. Last year's "End 2 End" mini game is replaced by the new "Superstar Challenge" mode. It presents players with a number of real situations from games from the 2006 NFL season, asking them to replicate star players' moves like making last-minute touchdowns... 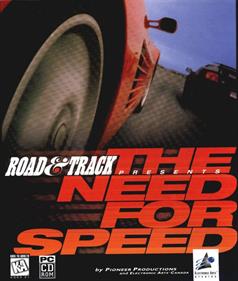 The Need for Speed

Drive some of your favourite sports cars through wild and fast tracks, including the Dodge Viper, Lamborghini, Ferrari, Porsche, Corvette, Mazda RX7, Toyota Supra Turbo, and Acura NSX. Some of the tracks are open road, meaning you simply fly down a huge highway, with cops following in hot pursuit. One of the options in the game allows you to pick which time of the day to race in. 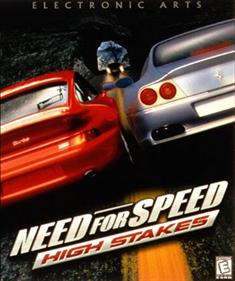 Just like its predecessors Need for Speed: High Stakes is an action racing game with a wide selection of exotic sports cars and many different types of tracks. The trademark Hot Pursuit mode game mode from the first game in the series is still present, where players race opponents on tracks filled with regular traffic and police cars that chase the racers. The classic pursuit mode is extended with two additional modes: Getaway and Time Trap. In Getaway the player needs to shake off the police in a set amount of time, or playing as the police trap a speeder before time runs out. In Time Trap an... 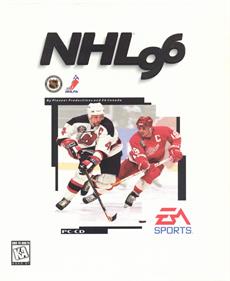 NHL 96 was the first EA Sports game to feature Virtual Stadium technology, which resulted in a 3D feel and multiple camera angles. The NHL license ensures that real teams and players of the era are included, with a full league and playoff system. Many game options can be toggled - the infamous fighting is optional, as are the penalties and offsides. The control system makes it possible to execute one-touch passes, and several special trick moves to quickly advance the ball. As a bonus feature, it included Hockey Card profiles of every player on CD and interviews with the stars of the game. 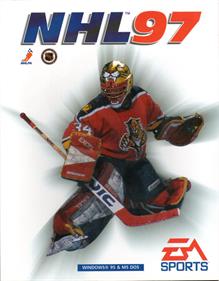 1997 edition of EA's NHL sport simulation series. Improvements in this edition come mostly in the graphical arena, with a refined version of the "virtual stadium" system that adds new camera angles (including the classical top-down one strangely missing from NHL 96), and polygonal players instead of the bitmap-based ones with motion-captured animations. Other extras include multiplayer support for up to 8 players through network or Gravis's GrIP system, the option to create new players and trade them around, and the usual amount of EA sports licensed multimedia flair, including an... 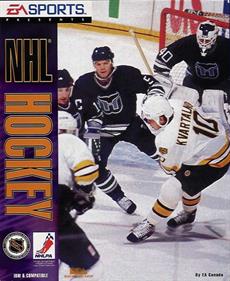 After the highly popular first two games of the series (NHL Hockey and NHLPA Hockey '93), EA acquired both NHL and NHLPA licenses, and along the award-winning console versions of NHL '94 developed a more complex game for personal computers. While overall the game shares the same graphical style as the console versions, they are much detailed here, with jersey logos and even smaller details such as pixels decorating the Quebéc Nordiques jersey where their three Fleur de Lys should be decorating the players, and a much more colourful ring all around. Gameplay follows the same action-packed... 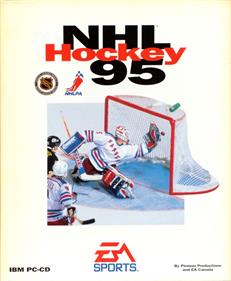 NHL Hockey 95 was EA Sports' third licensed ice hockey game, promising the fastest action in the series to date. The action is viewed top-down, and can be played with or without realistic penalties. There is a full season mode, allowing you to guide a team through all 84 matches, with the option of injuries potentially putting players out of a sequence of matches. You have full control over trading and creating players for your squad. New in-game moves include dummy shots and lie-down blocks. 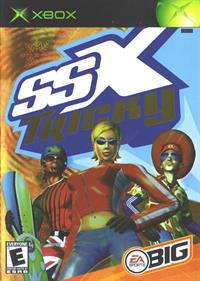 SSX Tricky launches you into a world of monster air, intense tracks, and death-defying tricks. Six all-new competitors plus six riders from the original SSX make up the circuit. Compete in the World Circuit, go head-to-head in the Showoff versions of nine courses on the World Circuit, or just practice in Free Ride. With all-new Garibaldi and Valdez courses, you'll have plenty of huge cliff drops to catch big air and pull off Uber tricks. (Source: metacritic) 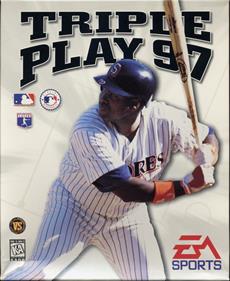 Many of the features that players have come to expect in a baseball game are featured in this early edition of the Triple Play series. A manager mode that allows players to be traded just like in real baseball is included. Since the game is licensed by the MLB and players associations, it has all the teams and players of the 1997 season. Game modes include exhibition, series play, all-star playoffs, and full and partial season play - in which players also sustain injuries and go on hot and cold streaks. The Home Run Derby is an additional feature. 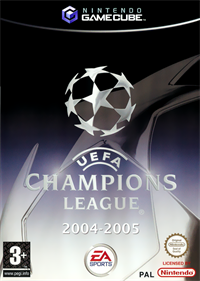 After many years under Eidos/Silicon Dreams ownership and development, EA releases the official Champions League game for the 2004/2005 season. The last rehash of the engine debuted on FIFA 2003, it draws most of it's gameplay elements from the 2005 edition, but with some changes to gameplay such as a slightly more aggressive AI on attack (reducing the need to constantly push players forward using the Off The Ball controls, still present), new refereeing aspects such as some deliberate errors (as in occasional bad offside calls or throw-ins, not cheating the player through mistakes),... 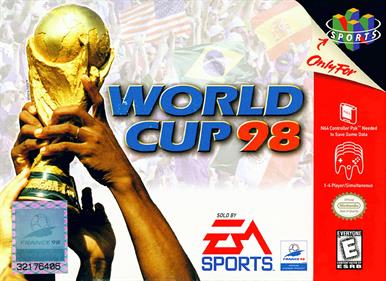 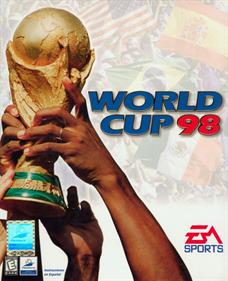 The licensed game of the 1998 Football World Cup held in France from June 10 to July 12 and the first World Cup licensed game distributed and developed by Electronic Arts features a tweaked FIFA 98 engine, with all 10 stadiums accurately designed and all 32 teams (plus 8 teams that failed to qualify but still deemed too important to leave out) featuring real names and close "look-a-like" kits. Changes done to the 3D engine feature include on the fly in-game management with better player positioning AI (including the goalkeeper), and faster gameplay. An editor to change all player information... 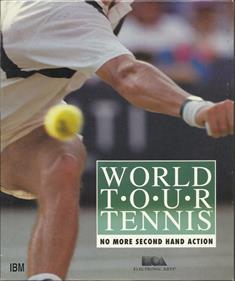 World Tour Tennis is a tennis game with management and competitive challenge of pro tournament. You can use the players already provided in the game or create players of your own. When a player has put in his time drilling the basics, you can launch him on a professional career, entering any of 69 tournaments.