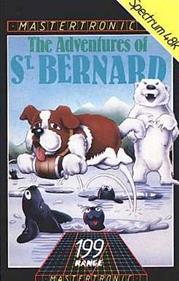 The Adventures of St. Bernard

Adventures of St. Bernard is a single player arcade adventure game. The player takes the role of a St Bernard rescue dog called Brandy and starts with a distress call being received. The player must guide Brandy across five levels during which he/she is attacked by wolves, walruses, skating penguins and snowmen. On some levels there is the added hazard of pools of freezing water. The game can be played entirely with the keyboard, there are only three controls Left, Right, and Jump. It also supports Protek & AGF interfaces.