This is an adaptation of Blockout, which in itself is a 3D version of Tetris. This is emphasized with the cartridge itself, having the artwork ripped from the original game. In this version the well is 5x5x10 cubes large and the size never changes, unlike the official versions. The controls are somewhat unorthodox, as unlike most other games, the Select button pauses the game while Start speeds up the block so that it moves to the bottom of the well faster. The block designs themselves are the same as in the arcade version of Blockout.

BB Car (also released as Mi Hun Che or Ecstasy Car in Chinese and Super Car) is a port of Rally-X, made for the Famicom and NES by Hwang Shinwei in 1988. It was published by Chi Chi Toy Co., Ltd (original 1988 version), RCM and JY Company.

Brush Roller is a clone of "Make Trax" also known as Crush Roller in Japan, developed by Kural Samno in 1981. Brush Roller was produced by Hwang Shinwei in 1990. The game can be found in multi-game cartridges and was sold on Brazil in single cartridge by CCE. 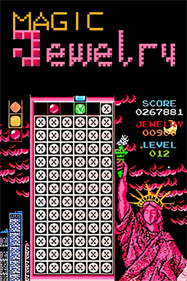 Magic Jewelry is a NES unlicensed tile-matching puzzle video game derivative to Columns, which was programmed in Taiwan by Hwang Shinwei and published by RCM Group in 1990, without a license from Nintendo. This title is common on pirate Famicom multicarts and systems; for example, it's built into the Dynavision and Power Player Super Joy III but existed also two hacked versions, called respectively Abacus and Coin Tetris (the first only on N-Joypad).

Magic Jewelry II is a Puzzle game, developed by Hwang Shinwei and published by RCM Group, which was released in Asia in 1991.