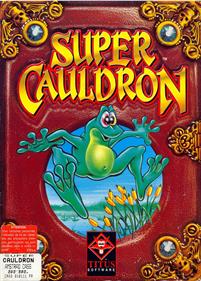 Super Cauldron is a platform game that was programmed by Elmar Krieger and released by Titus in 1992. The music was composed by Christian Lier using Soundtrakker. All graphics were PC transfers, except of the title screen which was drawn by Harris Kladis (Rex). It was one of Titus' last releases for the Amstrad CPC, along with Prehistorik 2.