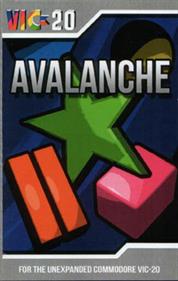 Avalanche is a fun action game people can just pick up and play. The player has to shoot the various gems that are falling down from the top of the screen. The gems are marked with symbols and the player has to match up the symbol on his ship with the symbol on the gems. The speed of the game will automatically increase during gameplay. Shoot strategically and get combos of four similar gems in a row to decrease speed and gain extra points