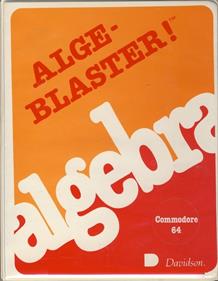 Alge-Blaster! is an educational game that teaches algebra for 7th to 12th grade. The game deals with five subjects each with a number of topics. For all topics there are three different activities. The first one is study the steps where the program gives instructions on how to solve a problem. The second is called build your skill and the third one solve it. These two works the same with player answering problems one at a time and then gets a result at the end. The difference is that the player can ask for a hint in the former.