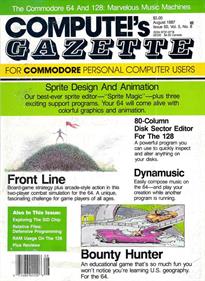 COMPUTE!'s Gazette 1987/08 (Issue #50). A head-to-head strategy game where in the future, two platoons of disrupter-equipped men battle for control of the last remaining natural forest. Since the game begins with neither side at an advantage, the player with the best strategy and the surest reflexes will win Front Line. Int eh game's action scenario, two men battle to the death for a strategically placed hilltop. Since each soldier has his own unique capabilities, every battle is different.