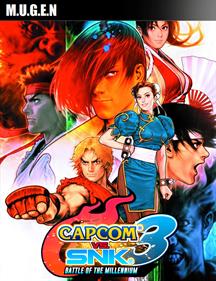 Capcom vs. SNK 3: Battle of the Millennium

A high-resolution M.U.G.E.N. fighter made by Yuri Sakazaki with a screenpack by creator EnlightendShadow, Capcom vs. SNK 3: Battle of the Millennium sets the bar for fan-made compilation games. The game features 64 characters from the sagas of Street Fighter, Rival Schools, The King of Fighters, Samurai Shodown and others, combining fast gameplay and a deep combo system.