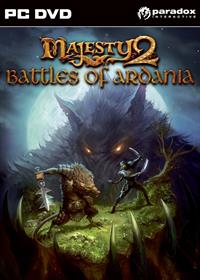 Battles of Ardania is an expansion set for the game Majesty 2: The Fantasy Kingdom Sim. While the kingdom is at peace, the kings feels bored. If there is no war, maybe a small battle is coming. And if there is no battle, a hunt is also welcome, especially if the prey is a mage-werewolf. The game contains: A new campaign with 8 missions New monsters New set of weapons Four new multiplayer maps (two of them are coop-maps) Increasing the selectable classes to more than 10 Support for ladders and tournaments