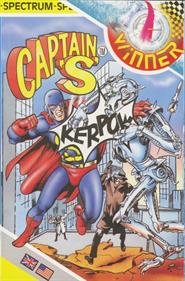 Mariano López, sausage transporter, suffers from the effects of an explosion nuclear. Unconscious is lying on the road next to his sausages and the remains of the truck, which are scattered throughout the area of ​​the incident. He wakes up hungry and swallows one of his sausages affected by the radiation. But what the hell is going on?! Mariano is changing: all his muscles grow; his height increases; his vulgar face becomes that of a handsome superhero ready to fight the evil teacher TORREBRUNO.