Avengers vs. X-Men is a fighting game developed by the Infinity Mugen Team in Conjunction with Project X. The game was built using the MUGEN fighting game engine, independently developed by Elecbyte. Original Soundtrack by WizzyWhipItWonderful The Project Leader and leader programmer is Acey. The main development team also consisted of Arkady. "Avengers vs. X-Men" is storylines published by Marvel Comics. The X-Men, Avengers, and all related properties are the property of Marvel Entertainment, LLC. This game contains content from X-Men: Children of the Atom, X-Men vs. Street Fighter...

Mega Man: Robot Master Mayhem is the third official project by the Infinity Mugen Team. The project began with the release of the game screen pack and character creation template to help encourage Mugen content creators to participate in the development of this game as well as give the individule mugen game player the ability to control their own game environment. Following 2 years of general development time, Mega Man: Robot Master Mayhem began the fist phase of full game development in April 2011 and included a cast from a wide range of Mega Man favorites. 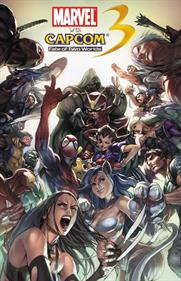 Following the December 2007 release of the Marvel vs. Capcom: Eternity of Heroes, the game project entered a new stage with upgrades including the use of a newly release Highres Win Mugen engine, new screen visuals, a new soundtrack, a new logo and an infusion of new Mugen authors participating to bring even more playable characters to the game. The most recent release occurred on May 31st, 2010 and continues in the public beta testing stage. Development continued on into 2011, promising to bring continued surprises to the table.