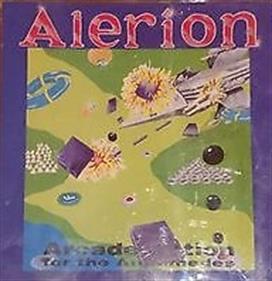 A clone of games like Xevious. Alerion tries nothing new, with the exception of a punishing difficulty. Released in 1994 when games like doom was dominating the gaming landscape. Alerion goes for a much different approach. Alerion released to the late to the life of the Acorn Archimedes -- the objective is to score as many points as possible. It's gameplay is fast and frenetic leaving the gamer only with their wits and a couple bombs to deal with the anti-aircraft fire down below. So what are you waiting for? Take to the skies in this exciting arcade shoot-em-up experience now!!!