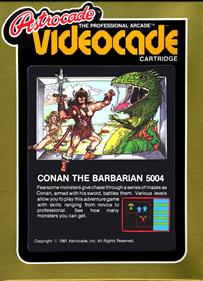 Fearsome monsters give chase through a series of mazes as Conan, armed with his sword, battles them. Various levels allow you to play this adventure game with skills ranging from novice to professional. See how many monsters you can get. This cartridge was a prototype and never officially released. However, the unfinished game was given limited distribution in 1985 through Dave Carson Software. Astrocade was unable to secure the naming rights and the game code was eventually merged into the development of Quest for the Orb which also never saw official release.