Like Aladdin by Super Game, this game is a port of the Mega Drive version of Aladdin. This port is often considered to be much worse than those two, suffering from poor programming, controls and collision detection, as well as numerous other flaws. The story was completely omitted from this game, apart from an ending being present. Upon starting the game the player is given the option to start on any of the 8 levels that this game has. 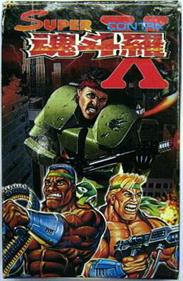 Super Contra X is a pirate based off the Contra series, created by Chengdu Tai Jing Da Dong Computer Co sometime in the 1990's. (Likely 1994). This isn't a complete clone of Contra or any games in the series, but instead tries to remake the engine and use it in completely different levels. Most of the weapons from that game are present, but function differently. The default gun is similar to the original, but sometimes pressing the fire button doesn't shoot a bullet when it's supposed to due to unresponsive controls. The machine gun fires slower and and doesn't allow you to fire while...