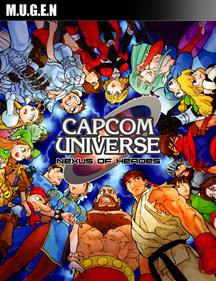 Capcom Universe: Nexus of Heroes is a full game project made using the M.U.G.E.N engine by Beximus and Walruslui. It is based visually on the classic CPS2 crossover fighting games, having original effects for Hyper backgrounds and some references from Marvel Super Heroes vs. Street Fighter. In August 2019, Beximus moved on from the project and handed a version of the project over to Walruslui, who would later make unofficial builds based on what Beximus had finished prior.