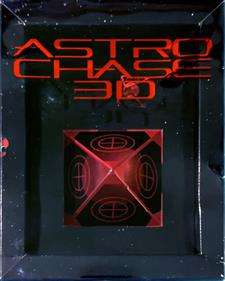 Astro Chase 3D is a space shooter which transfers most gameplay mechanics of its predecessor Astro Chase into a first-person perspective. In the future, aliens try to destroy Earth by sending Mega Mines toward the planet. Now the player needs to use the Ultraship and destroy those mines before they reach Earth! 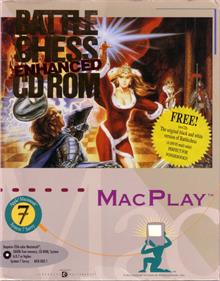 This version of Battle Chess, while retaining the gameplay of the original release, features improved 256-color SVGA graphics as well as new visual effects and animations. In addition, it has a symphonic soundtrack in redbook (CD audio) format. 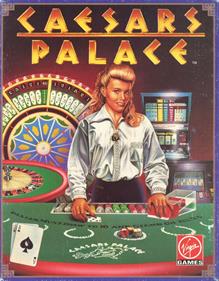 An upgraded version of the NES version, Caesars Palace for Macintosh features Blackjack, Baccarat, Poker (Paigow, 7 and 5 Stud, and Draw), Roulette, Craps, Slot Machines (Fortunes of Gold, Mighty Gladiators, and Seven Hills of Rome), Video Poker, Joker's Wild, Video Keno, and Video 21. The player can switch between games at any time, can save or load a game, can play with up to four friends (or computer players; four different levels of AI are included) in games where it makes sense, can customize the games, and can view examples of professional play. 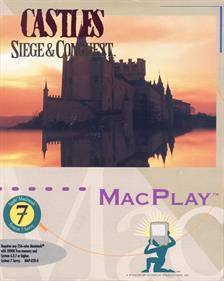 Also known as Castles II: Siege & Conquest on other computers, there are two versions, one that was published on 3.5" floppy disks, and a CD-ROM version with extra movies. Can you survive the drama of medieval diplomacy, treachery and power? To win, you must defeat native militias, subjugate the land with castles, feed and maintain the people, forge diplomatic alliances, appease the church and unite the land. 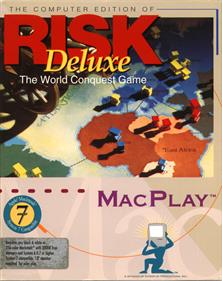 The Computer Edition of Risk: Deluxe: The World Conquest Game 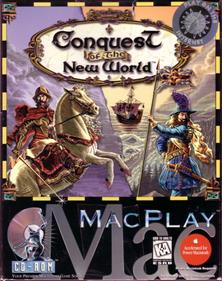 Conquest of the New World

Conquest Of The New World is a game much similar to Civilization in some ways. You start the game with your ship. You will have to make landfall with your units and get contact with the natives. You can either attack them or start to trade with them similar to things like in Civilization or Colonization. The control of your units is a new way of controlling. You drag an arrow from your unit to where you want it to move and moves automatically. 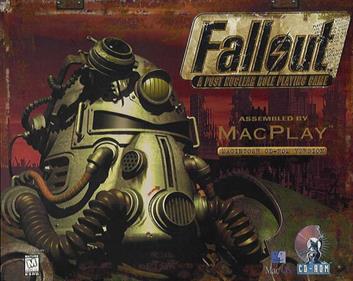 The first in the series, Fallout is an open-world turn-based role-playing video game. The game has a post-apocalyptic and retro-futuristic setting, reminiscent of post-World War II United States and the fear that the country was headed for nuclear war. Just before the bombs fell, some lucky people managed to reach safety of the Vaults, huge underground dwellings, during the war. Recently, the water purification controller chip in Vault 13 broke. Without clean water, the people of the Vault cannot survive. The protagonist is sent to find a replacement chip and ventures outside to face a... 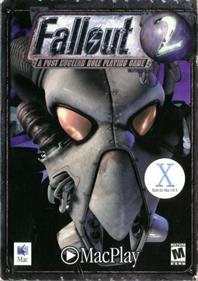 The sequel to Fallout starts eighty years after its predecessor. When the First Vault Dweller was forced from his home, he walked north until he found some new friends and founded a tribe in a suitable place. But some years after his death, the tribe is dying. The Elders decide that one of the tribe members, the "Chosen One", must find the salvation, a universal tool called G.E.C.K. (short for "Garden of Eden Creation Kit"). Sadly, the hero's only clue are the ancient disks the Vault Dweller has left, and the only equipment are his clothes and PipBoy. With courage and determination the... 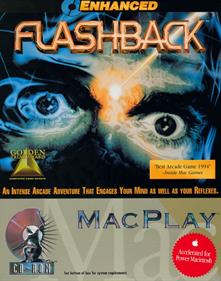 Flashback: The Quest for Identity

The year is 2142. The player takes control of Conrad B. Hart, a man who has lost his memory. After barely escaping from hostile aliens, Conrad's bike crashes on an unknown planet. Conrad finds himself in the jungle, and from that moment on his quest for survival and his lost identity begins. Flashback: The Quest for Identity incorporates elements of platforming, shooting, and problem-solving. The game can be described as a "cinematic platformer" (commonly referred to as Prince of Persia-style), following a design philosophy that was also manifested in Delphine Software's previous work,... 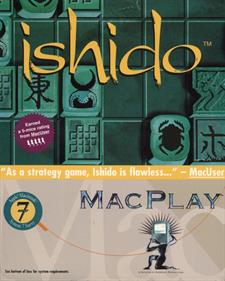 Ishido: The Way of Stones

Ishido is a solitaire board game played with tiles, similar to Shanghai. The objective is to place all of the tiles onto the board and obtain the highest possible score by following specific rules of play. There are ways to play that can dramatically increase the score, which makes the game very strategic in nature. Additionally, when desired, the player can get an oracle reading by asking a question, which is answered when the player makes a very elegant play (four-way match). There is also a "construction set" where players can create their own tiles and backgrounds. The game comes with... 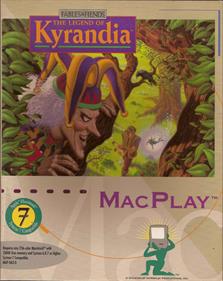 The Legend of Kyrandia

The Legend of Kyrandia is the first in a trilogy of adventure games by Westwood. In this game the player controls Brandon, grandson of Kallak - a wizard of the realm of Kyrandia. Malcolm, a psychotic jester imprisoned in the past by Kallak, has broken free and wishes to take over the land as well as lay down his revenge. He turns Kallak into stone leaving him with only his eyes, so that Kallak is not denied his tears for Kyrandia's sake. This is where Brandon steps in; returning home shortly afterwards only to find that his grandfather has been turned into stone, Brandon is being told by a... 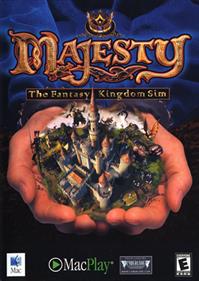 Majesty: The Fantasy Kingdom Sim is a real-time strategy game which, unlike other games in the genre, does not have the player directly control his units. Instead, all "heroes" are recruited from their respective guilds and as of that moment, their will is their own. The player, the eponymous "majesty", can direct heroes by placing bounties on areas and specific enemies to motivate heroes. Some heroes like rangers are more keen on exploration, while rogues believe in the rule of gold. All heroes level up with combat experience, thereby increasing their statistics. Wizard's towers and... 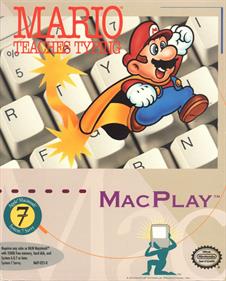 In this product you get to play one of four games, of progressing difficulty (as either Mario, Luigi or the Princess): Mario's Smash & Dash: Assist your character run past a series of boxes and turtles, each labelled with a letter that must be typed to avoid the obstacle. Mario's Wet World Challenge: Help your characters swim across the screen whilst being chased by hungry sea creatures - only typing the words that scroll across the bottom of the screen will let you escape. Mario's Tunnel Of Doom: Help your character run through a tunnel filled with traps, avoiding falling blocks and... 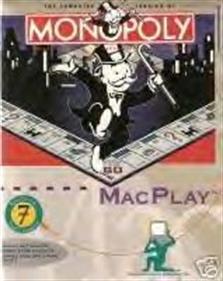 Everything you love about Monopoly is now here for the Mac. Classic Monopoly is a mouse click away as you engage in the pursuit of great fortunes. With computer enhanced graphics and billions of different dice sequences it's never the same game twice. Wheel and deal against the supreme game challenger, your Mac 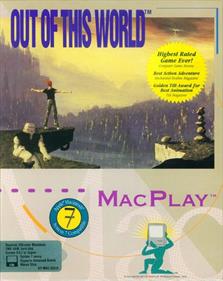 Out of This World

A young physics professor named Lester conducts a particle experiment. Suddenly, something goes wrong, a lightning strikes, and in a moment Lester finds himself in a strange alien world. Now he must fight for his life, first with his bare hands, then with a gun he finds. But what gives him courage is that he is not alone. One of the aliens who escapes from the prison together with him helps him on his dangerous quest. Friendship can overcome all the obstacles. Out of This World combines shooting, platforming, and puzzle-solving elements. The game is divided into stages; some of them are... 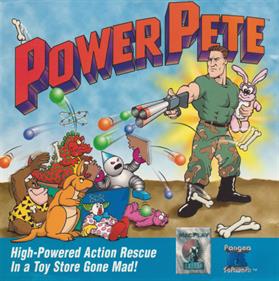 At the Toy Mart, the lights go out and bone-hurling cavemen, evil clowns, and crazed robots are among the bad toys who are out to attack and take over. The player takes the role of Power Pete, who must go through 15 levels while rescuing fuzzy bunnies and taking out the bad toys. The game has full speech with Pete spouting funny remarks throughout. The player has an arsenal of weapons such as gum ball blaster, pies, suction cups, and even flamethrowers. There are keys to collect along the way to open up differently colored doors. The player can use radar to locate where the fuzzy bunnies... 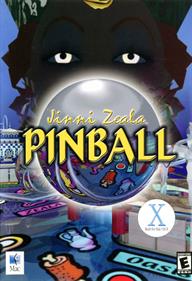 Jinni Zeala is another pinball simulator by LittleWing. The game has one table with a "1001 Nights" middle-eastern theme. The goal is to activate several bonus stages, represented in the table as models with three drop targets (with the exception of Felucca and Zeala stages) and a sink hole each. There are five stages: Oasis, Cave, Zeala, Palace and Felucca Boat. To activate most of them, the player has to acquire four items, each collected by dropping the three targets and sinking the ball in the hole. The Felucca and Zeala stages don't have targets, instead the player has to shoot the ball... 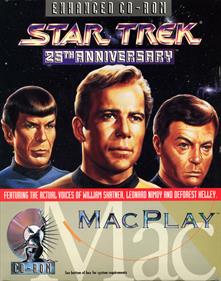 Piloting the U.S.S. Enterprise is a thrill in itself. But now the actual voices of William Shatner, Leonard Nimoy, DeForest Kelley, James Doohan, George Takei and Walter Koenig will make your adventure truly out of this world. As Captain Kirk, you'll control phasers, photon torpedoes, shields and communications. Plus, you'll test your intergalactic problem-solving savvy during eight separate space and ground missions in stunning 3-D alien worlds. This CD version features the actual voices of the cast of the original TV series. 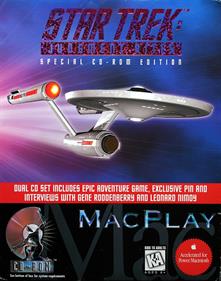 Judgment Rites is the successor of the Star Trek: 25th Anniversary. The game adds eight new missions, and is almost identical to its predecessor in terms of graphics, sounds and gameplay. The Limited CD-ROM Collector's Edition contains: enhanced CD-ROM version (with voice-acting) of the original Judgment Rites bonus disc featuring never before published interviews of Gene Roddenberry and Leonard Nimoy plus a video clip showing the making of the Judgment Rites video cassette containing two episodes from the original series Star Trek: Judgment Rites badge Later digital release of this... 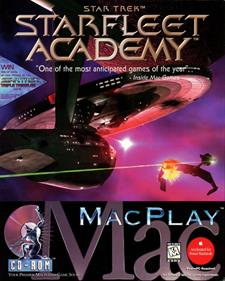 Getting into Starfleet involves passing a knowledge exam, and also demonstrating your space combat and command skills. It is this side of the Academy which features in this game. You play aspiring captain David Forester, backed by a wealthy and friendly crew: Sturek, M'Giia, Robin Brady and Corin. The action is similar in style to TIE Fighter, with the action viewed form your cockpit and full flight dynamics in action. Missions include taking on Klingons and Romulans, and dealing with a Vanguard rebellion from within. Before every mission, the briefing is given to you in a lecture style... 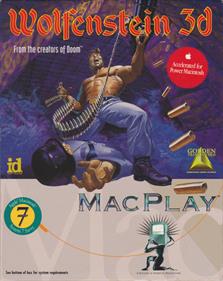