A vertical air combat shooter from Dooyong where you control a jet. This game was released only in Japan. 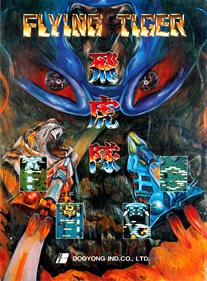 Flying Tiger is a vertical scrolling space themed shoot 'em up game where you take control of a spaceship. You fight a variety of space crafts (ground and air based), static guns and bosses. While playing destroyed enemies drop power-ups. These include: plus one (limited) bomb (B), weapon power-up (P), plus one up and C to switch between the two weapon patrons. The weapon patrons are straight (white C) and three-way (red C). The game can be play solo or with a friend. 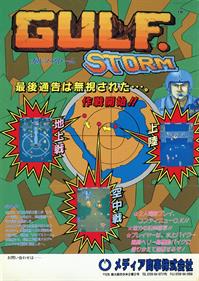 Gulf Storm is a vertical scrolling military themed shoot 'em up game where you take on the role of a member of the Rangers corps, part of the allied forces in the Gulf war. The player controls a predetermined vehicle each stage . These are a speedboat, helicopter or motorcycle. You fight a variety of tanks, ships, aircrafts, static guns and bosses. While playing destroyed enemies drop power-ups. These include: a faster shooting power-up (A), plus one (limited) bomb (B) and weapon power-up (P). You can play solo or with a friend. 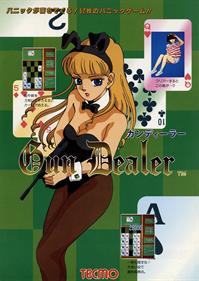 Gun Dealer is a 1990 arcade game released by the Korean distributor Dooyong. It is a puzzle game which combines the basic "falling block" mechanic (as seen in other games such as Tetris) with poker. Aside from its unique game play, it is also noteworthy for a soundtrack consisting of Bach's "Air on a G String", and the fact that, between levels, players are treated to a brief soft porn intermission of a Korean-featured girl in various stages of undress. Gun Dealer features a playfield five columns wide and several rows tall. "Blocks" in the form of playing cards gradually fall into this...

Gun Dealer '94 is a puzzle game for 1-2 players. It was developed and published in 1994 by Korean company, Dooyong. The game was licensed to NTC in Japan, where it was released under the name Primella.

The Last Day is an shoot 'em up, developed and published by Dooyong, which was released in 1990. The Last Day is 2D arcade vertical shoot'em up from South Korea. Gameplay in this title is pretty standard - the player controls a small plane and shoots various enemies, like planes, tanks, artillery or boats. He can use normal, upgradeable gun and limited smart bombs. Game uses several locations, like lakes, forest or cites - and some "special" monuments, like Statue of Liberty. 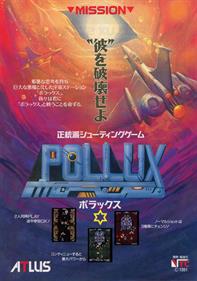 Pollux is a vertical scrolling space themed shoot 'em up game where you take control of a spaceship that has to terminate the evil main computer of a 22nd century space station. You fight a variety of space crafts, static guns and bosses. While playing destroyed enemies drop power-ups. These include: an automatic shooting power-up (A), plus one (limited) fire bomb (B), weapon power-up (P), short speed power-up (S), plus one up (U), homing missiles and three weapon patron power-ups (straight, three-way and four directions). You can play solo or with a friend.

And another game that combines standard puzzle mechanics with an unrelated game, this time Snow Pop is expanded upon with a Bingo element. Now some of the snowballs have letters written on them that are used to clear a bingo chart. The player who first completes a line on the chart wins. In between stages waits a bonus round, featuring nude photographs. Feels kinda awkward in combination with the overall cutesy style of the game. 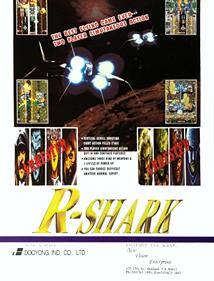 R-Shark is a 2D vertical-scrolling sci-fi shoot'em up. The player takes the role of a headhunter, and gets to chose to go after one of eight interstellar criminals. Gameplay is similar to a myriad of other shmups: The player in a special space ship flies and shoots at enemies - main interstellar criminals are bosses. His ship has a weak main weapon, and some support in the form of homing missiles, but better weapons like a laser can be acquired. Weapons are also upgradable and offer super attacks.

Yam! Yam!? is a puzzle game where you have to push diamonds into trapdoors to complete each stage shown on a single screen within a time limit. You play the role of a bear type creature and you must move around the screen made up of blocks as walls that cannot be pushed. As well as the diamonds there are also other items that can be pushed like peppers and skulls and you can push multiple items at once either one square or as far as they will go. As you push the diamonds and peppers (for bonus points) into the trap doors be careful that you don't push the skulls in or you lose one of three...