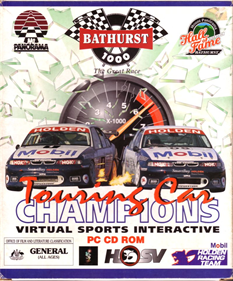 Touring Car Champions was the first attempt to create a game based on the Australian Touring Car Championship and Bathurst 1000. It was also the first to use full motion video as the base for a racing game. Only one track (Bathurst) is included. Touring Car legends was fully endorsed by the Holden Racing Team, Holden Special Vehicles, Mount Panorama Consortium, and Mt. Panorama Motor Racing Hall of Fame.